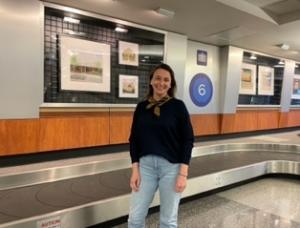 Eighteen photographs by Eliza Lamb, Ed.D. are on display at Richmond International Airport as part of a Virginia Museum of Fine Arts Fellowship Program.

I would wake up early and walk through the streets – revisiting the places I had known and the person I was when I knew them. The city seemed to stand still. It held its breath and I held mine.”

HOPEWELL, VA – VIRGINIA, USA, April 26, 2022 /EINPresswire.com/ — Eighteen photographs by Eliza Lamb, Ed.D. are on display at Richmond International Airport. The photographs are part of a Virginia Museum of Fine Arts Fellowship Program, which supports the work of Virginia artists. Dr. Lamb was selected as a Fellowship recipient in August 2020.

Dr. Lamb took the photo in her Hopewell series while she was living and working in New York City between the years of 2007 and 2015. “For the better part of a decade, I would travel south to photograph my hometown of Hopewell, Virginia,” said Lamb. “I would wake up early and walk through the streets – revisiting the places I had known and the person I was when I knew them. The city seemed to stand still. It held its breath and I held mine. No longer declining and not quite moving forward. The heartbeat of the community could be found – faintly, ever so faintly – plugging along in the summer heat.”

Responding to this feeling, Lamb moved back home to Virginia in 2016 to test the theory that art can transform a community.

That year, she opened the Lamb Center for Arts and Healing, which now serves over 6,000 people a year. Lamb Arts is a multi-faceted project which includes programs for Creative Change Makers in the local high schools, a Creative Aging Program for senior citizens, training, and support for art teachers in the local public schools, an annual Hopewell Arts Fest, and a Pop-Up Program of free one-time art experiences that “pop-up” throughout the area multiple times a year.

ABOUT DR. ELIZA LAMB
Dr. Lamb began her art studies at the Savannah College of Art and Design (SCAD),
After graduating from SCAD with a major in photography in 2004, she went to Columbia University in New York City, where she earned three masters’ degrees (Arts Administration, Clinical Psychology, Art + Art Education). In 2015 she also completed her doctorate in Art + Art Education.

Lamb Arts believes in the power of the arts to transform lives and communities. To that end, Dr. Lamb has intentionally selected Lamb Arts new home to be housed in a building in the heart of downtown Hopewell that she felt was most in need of care and renovation and is in the process of renovating it. Meanwhile, the Center is in a temporary location at 210 N. Second Avenue, Hopewell, VA.

According to Americans for the Arts:
“Cultural districts boost urban revitalization in many ways: beautify and animate cities, provide employment, attract residents and tourists to the city, complement adjacent businesses, enhance property values, expand the tax base, attract well-educated employees, and contribute to creative, innovative environment.”

ABOUT HOPEWELL, VIRGINIA
Hopewell is a quaint city of 23,000 about 20 miles south or Virginia’s capital at Richmond. Located at the confluence of the James and Appomattox Rivers, Hopewell’s historic section of City Point was one of North America’s oldest English-speaking communities. In the 18th century, Hopewell became a significant port city and in World War I it became a boomtown with the production of guncotton in the local DuPont plant. During the war, the city’s population rose from 200 residents to more than 30,000. The DuPont plant was closed after the war and the city’s population fell. In 1915 a fire destroyed 300 buildings in Hopewell, but the city quickly rebuilt. Other manufacturing plants moved into Hopewell, including Evonik (formerly Goldschmidt Chemical) In the early 1970s. The city has been investing in environmental controls and is now in the middle of a renaissance. There are new businesses, new restaurants and new and exciting projects, including Dr. Lamb’s Center for the Arts & Healing.