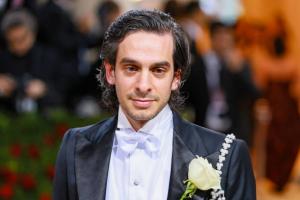 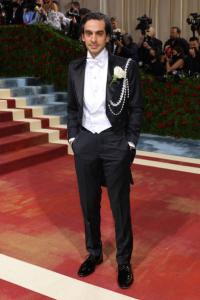 NEW YORK, NY, UNITED STATES, May 5, 2022 /EINPresswire.com/ — Gilded Glamour, marked the return of the Met Gala on the First Monday in May after a longwinded world pause. Now back in May, the guest list was more star-studded than ever and this carpet was all about statements, both bold and understated. Very few were able to get the white tie ensemble perfectly executed, and among those few was Justin Levine dressed in custom Dreu Beckemberg. Beckemberg is a Brooklyn-based celebrity menswear designer who was called on for the Met Gala twice in a row. Last year, Beckemberg did a stunning deep blue paisley, velvet tuxedo for Mayor DeBalasio’s iconic debut at The Met Ball and also dressed his son Dante DeBlasio in an equally stunning suit with cummerbund, styled by New York City-based Stylist Janet Igah.

This year, Beckemberg was called on to dress Met Gala music composer Justin Levine, also known as the Tony-Award-winning composer of Moulin Rouge. Levine, who was styled by New York City-based Stylist, Altorrin at The Wall Group, called on Dreu Beckemberg, one of the very few Black designers whose clothing has graced the Met Gala carpet on a body other than his own, to create the fully custom white tuxedo for the Broadway Lyricist. The Brooklyn menswear designer designed and created the look in just under two weeks. Altorrin and Beckemberg have worked together on editorials and NYFW presentations in the past, and it was the stylist’s brilliance and Beckemberg’s masterful craftsmanship that brought this classic look to a stunningly executed look.

Levine’s white tie tuxedo was created with a white pique tuxedo bib shirt and matching white satin bowtie. This was stylishly paired with a white silk waistcoat and a classic black tail tuxedo. Levine’s left shoulder was adorned by custom draped white diamond and pearl rope influenced by the British military embellishment and a white rose brooch to seal the look. Beckemberg’s vision of the gilded glamour theme far exceeded the fashion, with grooming done by Master Barber and owner Curtis Elliot of Mr. Barber Inc, a luxury Barbershop and longtime friend of the brand, next door to Dreu Beckemberg’s Brooklyn location. Black patented leather shoes were by Florsheim Shoes.

“Knowing truly that we are not always given the opportunity to be present in the spaces that benefit from us largely in monetary value and culture, it was an honor to reclaim space on the carpet, again, this year with Justin Levine. He was the perfect muse, so unassuming, but played a huge part in making the Met Gala happen. I am grateful that my brother Altorrin called on me for this epic moment in time.” – Dreu Beckemberg, Creative Director/Designer

Altorrin, who for over two decades, has always paid homage to the Black and brown people who have made incredible strides in this industry, chose Beckemberg by name.

“With Mr. Levine being the composer of the music for the Met Gala it was imperative to have him dressed in a way that honored the very meticulous dress code while inserting myself in it just enough to elevate the look. Having Dreu Beckemberg execute the vision was the very best fashion decision I’ve made in quite some time!” – Altorrin, Stylist/Art Director at The Wall Group

The Stylist also thanked the Designer in his stories on Instagram, stating “ @dreubeckemberg you are truly a magician… Can’t believe you built such a beautiful custom tuxedo in 9 freaking days…”

Intimate videos of the hour before the Met Gala, behind the scenes, show a floored Justin Levine, taking in the look for the first time, after being fully dressed. “Oh my God! Wow!” Beckemberg, who regularly dresses distinguished gentlemen for memorable moments is no stranger to TV stars and the red carpet. In the past year alone, he has outfitted 50 Cents (HBO FORCE), Parmalee (CMAs), Al Harrington, Olumide Onajide (ABC, The Bachelorette), Dylon Burnside (Posé), Nick Creegan, and Ethan Hawke while running his New York alterations shop in Flatbush, Brooklyn. See here for press photos.

The post This Brooklyn Designer is Making His Mark at The Met Gala with Unprecedented Red Carpet Debuts, Two Years In a Row first appeared on Reality Syndicate Viewers.

The post This Brooklyn Designer is Making His Mark at The Met Gala with Unprecedented Red Carpet Debuts, Two Years In a Row appeared first on Exclusive Discount.